By: Kim Shindle on October 22nd, 2020 in Association News

Editor’s note: The Pennsylvania Association of Realtors® is celebrating its 100th anniversary this year. As part of our Member Profile feature, we’ll be highlighting some of the Realtors® who have served as president of the organization.

If you could go back in time, what advice would you give your younger self?
I can think of many things, but when it comes to my real estate career, I think I should have become involved in leadership at the local, state and national levels way earlier than I did. I got tapped on the shoulder in 1986 to come to a PAR meeting. I wasn’t even serving on a local committee at that point, but then having visited a PAR meeting, it opened my eyes to see how great our local association really was. I wish I had done it many years earlier; I think I would have joined in leadership a lot sooner. Honestly speaking, I think if I had been involved earlier, it would have boosted my career a lot faster. That said, I hope others who think about doing it, do it sooner rather than later.

Why should agents get involved in their local, state and national associations?
I think if you feel that is a direction you wish to go, you should consider doing it right away. If someone asks you to come to a meeting or consider getting involved in a committee, I think you should absolutely do it. If it’s not for you, that is OK too. I would suggest you do it because having started on the local level and then advancing to the state level and now actually being very involved at the national level, it was probably one of the best things I ever did for my career and my confidence in myself. The networking opportunities alone are tremendous, being able to call people from across the state to give them a referral and then they reciprocate to give you one boosted my business beyond my expectations. The best part is feeling comfortable working with other Realtors®, especially in my local market, as they are the ones who you’re going to work with on a daily basis. When you get involved on the local or state level, you actually get to meet other Realtors®, you get to know them. I always like to encourage people to get involved at the local level as I believe it’s a great thing for your business.

What advice would you give someone who was thinking of moving up through the offices in PAR?
I think it’s a wonderful idea, but it’s not always for everybody. Sometimes you may think that
you’re not leadership material, but you find out very quickly when you get involved in committees, whether as a member or the vice chair or a chair, if this is something you’re really interested in. I remember thinking when I attended my first meeting, “Oh my gosh, this is so overwhelming.” I got involved in the Standard Forms Committee, which I absolutely loved, and then I wound up serving on that committee for seven or eight years, then I wound up serving on other committees as well. Had I known in the very beginning what my involvement would do for my career, like helping me to understand the forms, I would have done it sooner. Then I found that it was so easy to become involved and then become a vice chair and a chair of a committee, the next thing I knew, I was running for PAR treasurer. I think as you grow into these positions, you learn each year that you just keep going on up the ladder, as it all becomes the next step. I would encourage anyone who aspires to serve and volunteer at PAR, becoming an officer is a very fulfilling goal.

What’s the biggest change you’ve seen in the real estate market since you started?
There have been a lot of changes in the real estate industry since I started, but I think probably one of the biggest changes that’s had an impact on me has been electronic forms. When I started in this business, we had a fax machine and carbon forms in order to do our agreements of sale. Technology has always moved the real estate industry, but using electronic forms and being able to do an agreement of sale and send it out to a client in California, then get it back signed in 10 minutes and then the house is sold is tremendous. It allows us to move forward with another transaction very quickly, so that has probably been one of the bigger changes we’ve seen.

Do you think the environment or technology will have a bigger impact on real estate in the next 100 years?
It’s a tossup, but I’m going to go with technology. Just the thought of not having to put a customer in the car and drive them around and to show them 10 houses, when I can sit down with them and show them homes on their phones and we can look at a virtual tour of those homes, shows how technology has changed the business. Virtual reality allows clients to look at homes and make a decision by looking around the neighborhood and that’s amazing. After this past five months of COVID, it’s amazing how – here it is. Having represented a lot of builders, if they would never have to build a model would be great. The toughest part for clients used to be when there are three or four models, only one is built, they can’t decide until they see all of them. Builders would never have to build all of the models. Looking to the future, if clients do want to drive to visit a home, they may have a car that drives itself to take them there, wow. I honestly don’t believe that a faceless robot will ever replace a Realtor® because we are in a relationship business and believe we are the glue that keeps our transactions together. That’s Who We R. The Realtors® Association of Metropolitan Pittsburgh brought a food truck to provide a freshly cooked meal to the folks who the Northside Congregate Feeding Program, also known as Daily Bread, in Pittsburgh. The Cambria Somerset Association of Realtors® recently volunteered to restore gravestones in a historic cemetery and fund a veterans memorial in honor of the more than 70 veterans, including some from the Civil War, who are buried. 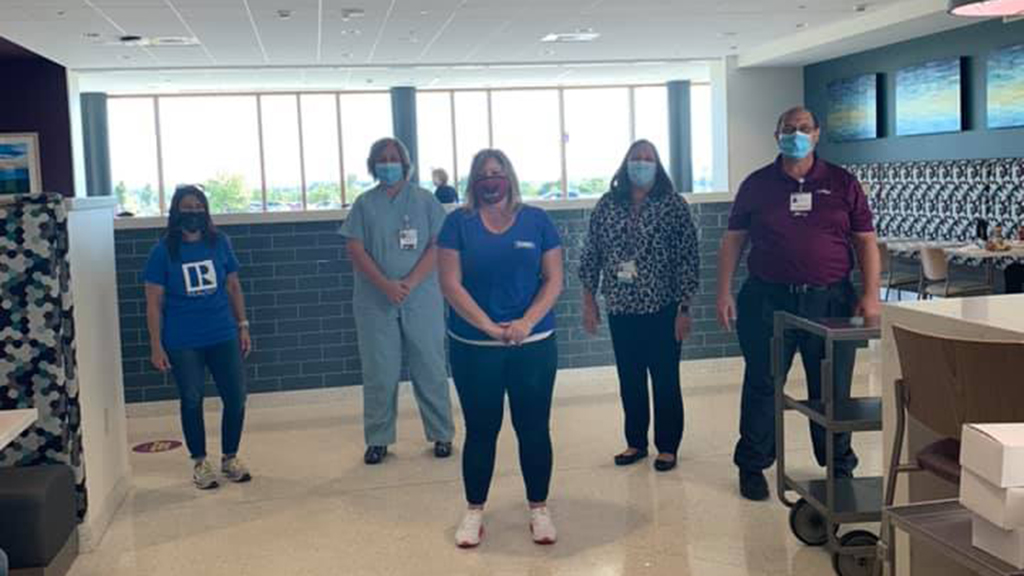 RAYAC’s Hands on Helpers Committee was able to serve 203 boxed lunches to frontline workers battling against COVID-19 at UPMC Memorial Hospital in York.